As I sat in a planning meeting preparing to leave for a 10-day humanitarian trip to Guatemala,

I had a distinct phrase float into my mind.  I pay attention to float-ins and this one in particular stuck with me:  PACK A SACRIFICE.
This became my mini-mission as I thought about what to put in my suitcase.  We were only afforded 20 pounds in a carry-on and 10 pounds in a backpack.  I looked around my house and took inventory of my belongings.  I didn’t have anything that seemed to scream, “I am a sacrifice”.
I could easily part with (and readily replace) most of my clothing, jewelry, and other belongings.  This forced me to investigate my heart-what IS that meaningful to me?  And what might be useful to a brother or sister in different country?  Amidst my clothing, shoes, toiletries, and books,  I didn’t feel that I put any sort of sacrifice in my bags.  Epic fail.

What I did pack was my full set of marked-up scriptures.  I debated doing it since we do live in the technology-age and they do weigh about 10 pounds….but I am a paper- scriptures- kind-of- gal so they came with me.  It’s important to understand that while there are some people in the world who would never DREAM of writing in their scriptures, I am not one of them.  Mine are like a workbook, a journal, a trail, and a ready-made receptacle for personal revelation.  I had my first set of scriptures for 25 years.

About 2 years ago, I took a deep breath, put my beloved scriptures on the shelf and plunged into a new set.  It takes me hours, weeks, months, and years of study to get my scriptures the way I like them.  I have topics I’ve studied, personal scripture chains, complimentary verses and favorite phrases all marked and noted in the front.  I can easily navigate anywhere my mind leads me.  I love my scriptures.  I love personal scripture study.  It has changed my life more than any one thing that I have done.  It is a constant source of inspiration, teaching, comfort, and intelligence.  I feel sorry for all of my pre-Gutenburg brothers and sisters who couldn’t own their VERY OWN scriptures.  Aside from my husband and children, my scriptures are my most prized possession.  You see it coming?  I should have known.

Our very first day at the Senior Center I met a man named Marco.
Much to the delight, surprise and wonderment of the other residents (and ME!), Marco spoke perfect Anglaise.

We had great conversations!  One of his first questions to me was about my religion-was I religious and if so, what church did I attend?  I proudly rattled off the full name of my church, “The Church of Jesus Christ of Latter-day Saints” to which Marco replied, “In this country we call that the Mormon church.”  HAHAHAHA.  So do we.  (I was trying to be so good!) What ensued was a week-long conversation about the Savior.  He would request a discussion and I would prep for it that night.  We discussed Revelations 20, Luke 10 and many other topics of great religious content.  It turns out the Mormon branch was a block from the Senior Center and Marco had been attending for several months prior to our coming.  He had the Ezra Taft Benson lesson book in Spanish but he had no scriptures.  I had brought along a spanish Book of Mormon to give away, but Marco wanted an English one.  Miraculously, a father and son in our group had one and provided it to him.

As the week progressed, Marco asked if he could get an English Bible.  AHHHHHHH, an ENGLISH bible.  I wonder who has one of those?  Because SURELY I would not be required to give up my SCRIPTURES. 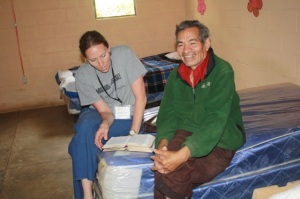 I pondered asking the group if one of them had a Bible that they would be willing to part with.  But the Spirit scolded me-I was being asked to give up mine and to delegate the sacrifice would not be proper.  Fine.  I waited until the last possible moment-Friday-to take the BIble with me.  I was really wrestling with the Spirit.  Thursday night I  took a long farewell look at my Bible and my notes in it and then I put in my backpack for Marco.   Friday morning I felt impressed to put my triple combination in as well (Book of Mormon, Doctrine and Covenants, and Pearl of Great Price).  But I made it clear to the Lord that my triple combo would not be staying at the Senior Center…after all, Marco already had an English copy of the Book of Mormon and that’s all that he wanted…right??

I found a break in our activities to present my Bible to Marco.  He was very grateful.  On impulse and to allay other pressing impressions, I also gave him my scripture cover-all leather, zip up, very nice.  I tried to tell myself that I had  given enough.  But deep down, my spirit wasn’t buying the argument. The Spirit pressed upon me to give him my triple combo but instead I decided to ask Marco if he WANTED my triple combo. He asked me the difference between what he already had and what I was offering.  I explained that the triple combo had ALL of our scriptures including latter-day revelation.  I admit here that I did try to downplay the role that the Doctrine and Covenants had played in our conversations that week.  He smiled and told me that it was ok-he would be fine with what he had.  He probably noticed the anxious smile on my face as I offered it…or he read the tense body language that was screaming, “Please say no!  Please say no!”  Happily, I tucked my triple back in my pack and said to myself, “See, he doesn’t even want it..and he does have a Book of Mormon…and now I won’t dilute Jacob’s Book of Mormon gift, etc, etc…” Justification galore rolling out of my soul.

As we prepared to leave, I acknowledged the pit in my stomach but I reminded myself that Marco had everything that he had asked for. 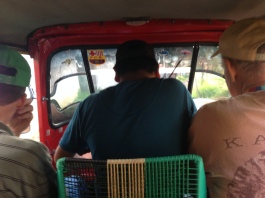 I climbed in our tuk-tuk and we started down the ‘driveway’.  Half-way down I felt the remorse of ignoring the inspiration and not giving one of the only sacrifices that I really could give.  I had wanted to pack a sacrifice, but when push came to shove, I didn’t really want to offer it.  I was ashamed of myself so I tapped on our driver’s shoulder with an “Uno momento, por favor” and I sent my son up the hill with my triple combo for Marco.

I don’t know what will come of it all for Marco.  But I do know that I unwittingly packed a sacrifice on May 21 and that I was asked to leave it all in Guatemala.  And I know that I wrestled with the Lord over it and I looked for a way out of it and I wanted another to take my place.

I tried to dilute the sacrifice and I hoped to keep part of it for myself.  I justified until my whole soul cried out in mercy but at the end of it all, I did it!  I packed a true sacrifice and I gave it to the one that was supposed to have it.  He may be completely confused by my notations BUT THAT’S OK.  The gift was for me to give, not necessarily for him to receive. I love Marco so it will all be just fine.  And now I have brand new scriptures to look forward to and I trust  God enough to know that over the coming weeks and months and years, new inspiration will come to me to fill my new set of scriptures.
Until then…it’s study central over here…with a big nod to Abraham who was asked to sacrifice that other thing that I really couldn’t have laid on the altar.  And then there’s our Father who really did give it all and a Son who willingly complied.

9 thoughts on “Sarah, Pack A Sacrifice”

Lost in the Shuffle